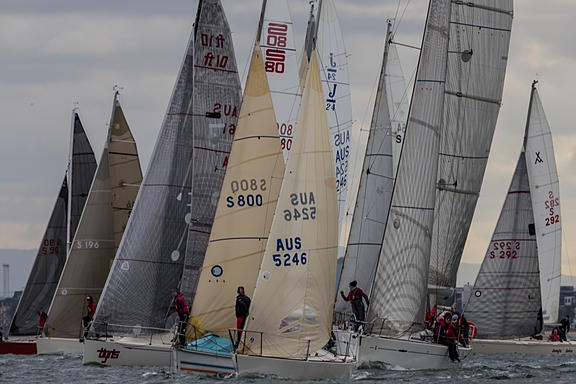 The 25th Australian Women’s Keelboat Regatta at Royal Melbourne Yacht Squadron in Melbourne is coming up in June and the Silver Anniversary is going to be bigger and better than ever! With teams coming from across Australia and interest being shown from international teams, the fleet is already shaping up to be a competitive one.

The Hyper Girls (centre in the pic above) have taken this one out more than once before, proving that the J24 is very competitive in this fleet, so if you are local at Sandy why not get your boats up the bay. Looks like there may also be a crew from Manhattan coming. Which means if you are from Sydney or Adelaide, you really are coming from just around the corner. Boats may be available to use from the Sandy fleet.

If you are a female sailor and would like to get involved, or if you are a boat owner who would like to donate your boat to a team please contact RMYS Sailing Coordinator Allicia Rae – awkr@rmys.com.au

The YV Port Phillip Women’s Championship Series (PPWCS) 2015 marks the third series which combines the existing ‘signature’ women’s events from the five keelboat clubs at the top of the bay into one event and will be contested on the waters of Port Phillip from February to May 2015. Check out the Championship details here  http://www.womenandgirlsinsailing.com.au

Don’t want to do the whole championship – why not sail the opening race and enjoy the party !

The Jennifer Goldsmith Trophy is also race 1 of the Port Phillip Women’s Championship Series
For more information on the series please visit   www.womenandgirlsinsailing.com.au

This is the traditional ‘Lady Skippers’ Race’ and has been a feature on the sailing calendar at Royal Melbourne Yacht Squadron for many years.

Traditionally the race is open to any yacht as long as it is ‘skippered’ by a woman.  She can have a crew of all males, a mixed crew or a crew of all females but the boat must be helmed throughout the whole of the race by a female.

Entry for the 2015 Jennifer Goldsmith Perpetual Trophy is now open. You can read the NOR and enter here: http://www.rmys.com.au/jennifer-goldsmith-perpetual-trophy.html

This is the first race in the Port Phillip Women’s Championship Series and as always there are going to be some gorgeous prizes thanks to the Goldsmith Family.

Details of the lunch post racing will be available soon.